Being a snooker player doesn't get much better than this

"If I can still compete at on the tour at Steve Davis's age, I will do so. But to be honest, I will just be happy to still be walking at 55!"

Mark Selby on how he plans to keep on playing as long as possible. 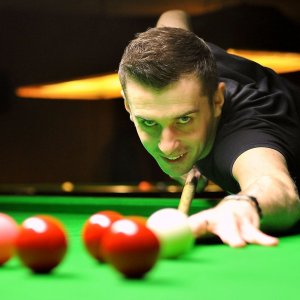 What make of cue do you use? Stamford Cues. I had a Parris cue until a few years back but it got to the stage that I needed a new one. I used to take my cue to Stamford for repairs as they’re only 45 minutes away, and they put a few on display for me and I picked one that felt comfortable. That was in 2007 and I’ve been using it ever since.
How many 147 breaks have you made, in competition or practice? One in competition, and around 85 in practice. I used to keep count but don’t so much anymore.
Who is the best player you’ve ever played? Stephen Hendry. He broke so many records and just had everything. I played him in my first year on tour when he was at his peak, and it was an honour to play him.
Who is the greatest player ever to pick up a snooker cue? See above!
What is your favourite tournament venue? I wouldn’t say the Crucible is the best venue, but it is the best playing arena, it’s second to none. And especially when it’s down to the one-table situation. And also because it’s where the World Championship is held, my favourite event.
Best moment in snooker? Winning the Masters on my debut in 2008.
Worst moment in snooker? Where do I start?! Probably losing to Mark King in the first round of the World Championship in 2008. I’d had a great year and went there in top form, full of confidence and thinking of winning the title after finishing runner-up the previous year.
What is your strongest trait as a player? My temperament. It’s got better and better as I’ve progressed, and it helps bring out the best in me when I’m in pressure situations.
What is your walk-on music, and why? It’s still Underdog by Kasabian. I know a few of the band and, because they’re from Leicester, it was an obvious choice. I suppose I should think about changing it though, I can’t really call myself an underdog when I’m world No.1!
Greatest match you’ve ever been involved in, win or lose? Beating Ronnie O’Sullivan 10-9 in the final of the 2010 Masters, when I fought back from 9-6 down. I’d never experienced an atmosphere like it, nor have I since.