"I'd be so chuffed to see my mate Barry Hawkins win the title, he a great bloke."

Michael Holt gives us the Crucible lowdown in our special World Championship Q&A.

The atmosphere will be electric at the Crucible tomorrow

"It really doesn’t get better than this as a snooker player."

Michael Holt is delighted to be back at the World Championships after two years away.

Shame I missed out on the Welsh Open

"Ive felt that a good run has been on the cards for a while now and, if I continue to play like that and give myself more chances, I will get there."

Michael Holt on reaching the quarter-finals of the German Masters. 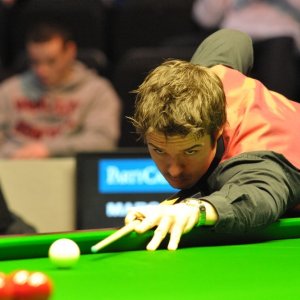 What make of cue do you use? Glover. They’re a firm based in Ashby de la Zouch. It was a 16th birthday present and I still use it today

How many 147 breaks have you made, in competition or practice? I honestly don’t know. I’m not prolific, but it’s somewhere above 50

Who is the best player you’ve ever played? I’ve played everyone, but there’s been no-one better than Stephen Hendry

Who is the greatest player ever to pick up a snooker cue? Stephen Hendry, because he’s the most prolific winner and, when you ask what a great player should be, he had it all. In every facet of the game he’s the best, in terms of dedication, temperament and that he always gave it his all. Ronnie O’Sullivan is the best player to watch, but he hasn’t won as much as Hendry

What is your favourite tournament venue? The Crucible, it’s such a unique place that nowhere compares to it

Best moment in snooker? There haven’t been that many! I’d say winning the PTC in Prague because I’d had a bad season playing-wise, but I also had problems away from the table because my dad was ill. I beat John Higgins in the final but also had to beat Mark Selby, Shaun Murphy, Stephen Maguire and Jamie Cope on the way, so I had to do it the hard way. It was a very special moment and a great feeling taking the trophy to show my dad in hospital. But I hope my best years are still to come

Worst moment in snooker? How long have you got?! Probably when I lost to Steve Davis in the last 16 in Sheffield. I’d bee playing well but I let myself down and threw in the towel too early. I didn’t appreciate what I’d got or what I was doing and my attitude was shocking. I was very disappointed in myself.

What is your strongest trait as a player? My scoring is pretty good. I’ve always been decent at potting and break-building and, as I’ve got older, my knowledge of the game has improved too. The experience counts against some of the younger players around today

What is your walk-on music, and why? At the moment it’s The Night Has a Thousand Eyes by Bobby Vee, because it’s my dad’s favourite song. But it could change soon, it depends what mood I’m in!

Greatest match you’ve ever been involved in, win or lose? One that sticks out was when I was in my first season on the main tour when I was 20 or 21. I was playing Dene O’Kane in a qualifier and I beat him 5-1, with three hundred breaks and two 90s. He said afterwards that no-one had ever played better against him, and he wrote down ‘A star is born’.

Three things you like? 1) Ibizia 2) Eating and cooking – I’ve got a few speciality dishes, such as a chili and garlic prawn dish and beef wellington. It’s all about how you cook the mushrooms to stop the pastry going soggy 3) Laughing

Three things you hate? 1) People who are not genuine 2) Liars 3) Turkish delight

Three things you want? 1) Health 2) Happiness 3) To be a better snooker player

Three things you regret? 1) How my attitude has sometimes let me down 2) Not going to university – I would have loved to have studied sociology because I’m fascinated by people, or maybe something to do with cooking 3) Can’t think of a third, I’m not really one for regrets

Three things that need doing at home? 1) Painting the stairs again because my girlfriend chose the wrong colour! 2) Tidying the garden 3) Sorting out the kitchen