Doing my bit for the refs of the future

"Referees all watch each other and are happy to share information if any little mistakes creep in, as it keeps the standard of officiating high."

Paul Collier on working with new referees during a seminar before the start of the Shanghai Masters. 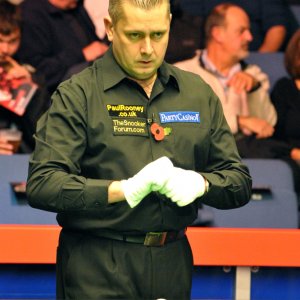 What made you become a referee? I used to play and, at 15, I went for some coaching at a local club. The coach and top local referee, Vic Jones, insisted you learned the rules before he would coach anyone to any great degree. I learned the rules, was recommended for my referee’s exam and the rest is history.
Would you like to have been a snooker pro? No! I have seen too many great players under immense pressure. Although referees are sometimes ‘under it’ a little, we don’t suffer like the players. Plus, I like knowing exactly how much I am going to earn before I start!
Who is the best player you’ve ever refereed? All-round snooker player and mental control/ability, it’s Stephen Hendry. With John Higgins not far behind. The most talented cueist, in my humble opinion, is Ronnie O’Sullivan. I had the honour and pleasure of refereeing for multiple world champions, and great players, Ray Reardon, John Spencer, Fred Davis, Alex Higgins and Steve Davis.
Who is the greatest player ever to pick up a snooker cue? Look at my previous answer and work it out! Tough call, but I think Hendry gets the nod. Don’t forget how good Steve Davis’ record was in the ’80s, but John Higgins has achieved great success over a long period too, and his opposition was probably stronger than Steve’s.
What is your favourite tournament venue? For the history and prestige of the place, it has to be the Crucible. But I absolutely adored Wembley Conference Centre, and had great times at Preston Guild Hall, too.
Best moment in snooker? Has to be refereeing the World Championship final at the Crucible in 2004, but close runners-up are the Welsh Open final in 2002 – my first ranking final – and being selected to referee for Wales in the Junior Internationals at Hemsby in 1998.
Worst moment in snooker? Any mistake I’ve made at the table. In a career of more than 20 years, you are bound to make errors. I don’t think I’ve ever really cost a player with a genuine mistake, but it is always at the back of your mind if you do get something wrong.
What is your strongest trait as a referee? Probably experience and understanding of the game. I think I come across as pretty confident in my knowledge and ability, which seems to put the players at ease and they don’t try and take liberties, generally...
What’s the most difficult aspect of being a referee? Keeping concentration. Lose it for just a few seconds and it can take ages to get 100 per cent back into the match, if you can at all. I find that if a referee makes an error, it is generally where there is a genuine distraction, something like an incident in the crowd or on another table, which breaks your concentration. Most people who criticise referees on TV may well be good referees themselves at club level, but have they ever worked under the conditions we have inflicted on us with audiences of thousands and TV audiences of many millions?
Greatest match you’ve ever refereed? Too many to single out a dozen, never mind one! You don’t realise the immense standard of some of the matches in the qualifying stages, never mind what we see on TV. I think though that the Welsh Open final in Cardiff between Ronnie O’Sullivan and Steve Davis was a bit special, because Steve rolled back the years, looked totally unfazed and played Ronnie at his own game for much of the match. Ronnie had to give it his very best to win the last three frames from three down with three to play and pinch the title. I had also been in a serious car crash just a week before, and that great match took so much out of me I was mentally and physically drained and forgot how much pain I was still in.

Three things you like? 1) My family 2) My career 3) Good times
Three things you hate? 1) Feeling ill 2) Conceited people 3) Anyone who beats Wales at rugby (so not England recently)
Three things you want? 1) Good health for my family 2) A long career 3) To be the best … and not just referee!
Three things you regret? 1) Not spending more time with my dad and my family (Dad died suddenly when I was 24) 2) Walking out on World Snooker for five years instead of keeping on fighting for what was right 3) There are some things I would do differently, but nothing else I genuinely regret, yet!
Three things that need doing at home? 1) Sorting out my old clothes 2) Gardening 3) Decorating (I am a lazy sod when I’m home!)