"Backstage is not as pretty as it could be, it’s all scaffolding poles and wires. But it wouldn’t be the Crucible without all that."

Stuart Bingham gives us the Crucible lowdown in our special World Championship Q&A.

I'm ready to do some damage at the Crucible

"The draw in Sheffield is never easy, but if you want to win the title, you’ve got to beat them all."

Stuart Bingham looks forward to the World Championships, and says his preparations are going really well.

That plant was a kick in the teeth

Stuart Bingham on the miss that cost him the Welsh Open title in Newport last week. 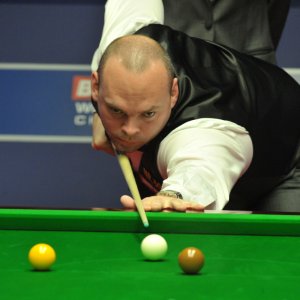 What make of cue do you use? It’s a Cue Doctor, made by a local cue-maker. I’ve had it about four or five years, but I’ve got a replica John Parris that I might try using.

How many 147 breaks have you made, in competition or practice? To be honest, I stopped counting after 110. I’d say it’s around 160-170 at the moment. I’m well-known for making lots of maximums.

Who is the best player you’ve ever played? Ronnie O’Sullivan, he’s got everything. I’ll swear that whenever he opens his eyes and looks at a snooker table, it’s like looking at The Matrix.

Who is the greatest player ever to pick up a snooker cue? Stephen Hendry, he’s the ultimate winner. He hates losing and the way he kept going at such a high standard shows what the man’s made of.

What is your favourite tournament venue? It’s got to be the Crucible at Sheffield, the home of snooker.

Best moment in snooker? Winning the Australian Open in 2011, that was the real breakthrough for me.

Worst moment in snooker? One moment that still haunts me today is the final of the World Amateur Championship in 1997. I’d won it the year before and was going for back-to-back titles, but in the final against Marco Fu I was 7-1 up only to lose 11-10. That’s the one I always go back to. There was also the time I missed a pink when on course for a 147 at Sheffield in 2002.

What is your strongest trait as a player? Break building.

What is your walk-on music, and why? At the moment it’s In the Air Tonight by Phil Collins. I choose my songs based on the words, they help pump me up before a match. I used Champion by Chipmunk before the ATP and Wuxi Classic in China, because I am a champion now, and I might stick with that from now, it really makes me feel good.

Greatest match you’ve ever been involved in, win or lose? The final of the 2011 Australian Open, without a doubt. Under the circumstances, being 8-5 down against Mark Williams, to come back and beat him 9-8 from being nowhere was just amazing.

Three things you like? 1) Family 2) Snooker 3) Sport in general

Three things you hate? 1) People who can’t drive properly 2) Rain 3) People who change, such as someone who’s enjoyed success, or someone whose attitude changes towards a friend who is successful

Three things you want? 1) My own jet 2) A Bugatti Veyron 3) To be world champion

Three things you regret? Not having had a family when I was younger. I can’t think of two others

Three things that need doing at home? 1) The front garden 2) My son’s room 3) We had the back garden done but the end of it still needs finishing off