As long as your action is on cue, youll be okay

When you’re watching snooker on TV you might hear the commentators mention a player’s cue action, how smooth and fluent it is, or how unorthodox it is. It might not mean that much to someone who is not massively into snooker, and they could dismiss it as uninteresting or a throwaway comment.

But as any pro will tell you, your cue action is a vital part of your armoury, the same way a swing is to a golfer.

Your average snooker spectator may also struggle to see the difference in each player’s cue action and think they’re all the same. But each player’s is different, and to the trained eye it is easy to notice the subtle differences. It also reveals an insight into that player’s strengths and, in some cases, their weaknesses.

There are some very good cue actions out there, like Shaun Murphy, Ali Carter and Ronnie O’Sullivan. But I think the best is Neil Robertson’s.  No-one cues as straight as he does, and that means he doesn’t miss many long pots and, crucially, it holds up under pressure, that’s why he doesn’t lose many matches. Until last year he hadn’t lost in a final, so it shows how good he is when the pressure is on.

Your cue action is all about what feels good for you, whatever feels natural. Some players try to change theirs, mostly because they’re not getting the results, but I can’t understand why. Mark Selby has changed his a few times, but I’m a firm believer that if it’s not broken, don’t try to fix it. It takes a long while to get comfortable with a new cue action and, all the time you’re doing so, your mind is on that and not on other things, like potting balls. Any little movement can be magnified, you can’t get away with it like you would in other sports.

If an amateur player has a totally unorthodox action, say he feathers the ball too much and has no backswing to speak of, but he cues straights, pots balls, reads the angles and makes big breaks, why change it? I can never understand why Tiger Woods changes his golf swing so much, especially when he’s winning.

As I said, it’s whatever feels natural and most comfortable. Graeme Dott has got a very compact style, but he plays from the heart because he wants to win so much. Dave Harold has got one of the strangest actions you’ll ever see, he only pulls the cue back an inch and has no momentum in the swing.

But he won a ranking title with it. No-one else could play with his cue action and win a match, let alone a tournament, and similarly he wouldn’t win if he changed it, but somehow it’s successful for him so why should he change.

Joe Swail is another with an unusual action, but it still works. He got to the final in the PTC in Germany last week! He plays like a lot of players did when they were young – I did too, when I was about 10. But you try to get your arm straight, and keep it there, as you develop.

So if you’re an amateur player and you’re thinking about changing your action, maybe think twice about it. If it feels comfortable and natural, regardless of how it looks, then it’s probably the best cue action for you.

Very nice entry. Thx for that! 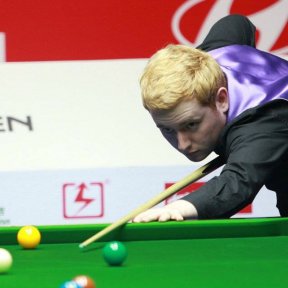