Rivalry on the snooker table can be seen as being pretty intense, but away from the table we’re all good friends and you may be surprised how many of us socialise together. It’s not unusual for the players though, after all, we spend a lot of time together on tour, especially when we’re away, so it would be no surprise to find a group of us eating out or hanging out.

Barry Hawkins had his stag-do in Magaluf the other weekend and Joe Perry, Mark Davis, Ryan Day and myself were just a few joining Barry in his celebrations. Of course, I can’t reveal any more about that weekend because what goes on tour stays on tour! But we’re all looking forward to his wedding next month.

All the players on the snooker tour get on well and we have a right giggle, it helps that we’ve all got one very big thing in common. Lots of us have known each other since we started out in the juniors, so a lot of strong friendships have been built up. I’ve been good mates with Matthew Stevens for 20 years, which is quite scary when you think about it. And my manager, Dave Bramley, has been with me for 14 years now, so I now consider him a good friend more than anything else.

Win or lose on the table, players will shake hands afterwards and move on, there’s a lot of mutual respect. Every player wants to win so it doesn’t matter who your opponent is, whether he’s a good mate or not. The desire to win a match is the over-riding factor, so it’s nothing personal

And sportsmanship is snooker is very, very good, you don’t see many dodgy calls. I’m pretty straightforward, black and white, and if I was to have an issue with a fellow pro, I’d approach them and resolve it face to face, and that’s the same for most players.

A good mate of mine is the boxer Carl Froch, and he tells me how a lot of his sparring partners are friends of his and he has to go out and beat them up. That’s extreme! I’ll be at Carl’s fight on Saturday night in Nottingham, cheering him on against Lucian Bute. Go on, Carl!

I started practising this week for the new season, just as the sun came out. Typical! But I hope to catch a few rays on Sunday running around Sheffield in the Half-Marathon. I’m running for the Paul Hunter Foundation, like a lot of my fellow players. I haven’t done much training, I’ll be honest, so I’ll probably just have to hang on to Steve Davis’ coattails!

Have you set up a 'just giving' site for donations?

Good luck with the run - drink loads, wear suncream and carry enough money for a taxi! 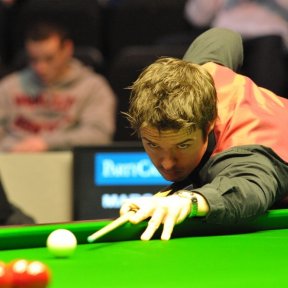