The Crucible can do strange things to a player

Without wishing to sound like Steve Davis, there are some interesting matches in the draw for the World Championships. It’s always an exciting time when the Crucible comes around again, and this year won’t be any different.

I was playing a practice match against Ricky Walden in Leicester when the draw was made on Thursday. We tried to access the live draw online but, whether it was down to me being a technophobe or a dodgy internet connection, we just couldn’t get it.

Ricky found out he is playing Kyren Wilson when his girlfriend texted him, and then minutes later I had a text from a mate telling me I’d got Michael White.

That’s a tough opener, but then they’re all tough these days. He had a great debut last year, reaching the quarter-finals, but he’s not really kicked on from that and had the season everyone expected from him.

But he will know what to expect this time and, like a lot of these young talented players, will be confident and will play with no fear. You only have to look at some of the surprise results from debutants over the past few years for evidence of that.

I’ve been playing really well this week. I had a couple of matches with Ricky and Michael Holt, to get match-sharp, and I know I just have to turn up on Monday and play my own game.

The Crucible can do strange things to you, though. It only holds 900 people but, when it’s full, it feels like twice that many. And there’s the whole prestige and weight of history that can bear down on you. If you’re playing well, it’s the best venue, but if you’re struggling, it’s the worst.

It’s a tough event to win over two weeks. The important thing is to get through first round, and then you feel like you’re in the tournament.

No doubt there will again be one or two ‘names’ who don’t get past the first hurdle. The Maguire-Day match is a horrible draw for both of them. Ryan is one of those players you definitely want to avoid. Martin Gould v Marco Fu could go either way too, it will be very tough for both of them.

It’s good to see Jamie Cope playing well again, he came through three hard matches to get there and I’m sure he will make life tough for Shaun Murphy.

Walden v Wilson will not be easy either. I’ve watched Kyren play and rate him highly. It’s his first time there but, as I said, they adapt so quickly these days and are not daunted by it.

Ding Junhui will be interesting to watch this year. He’s played some fantastic snooker, winning all those titles. He’s got that fear factor and opponents have lost to him before they’ve played him.

It’s long tournament though and maybe he’ll have nothing left to give. Whereas for me, titles have been thin on the ground this season. Hopefully I’ve saved my best for last... 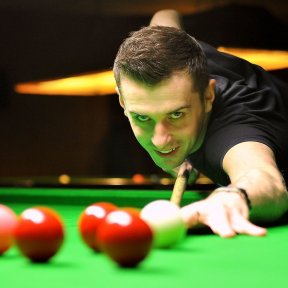